I’ve been dying to show you the first cover in my new Contemporary Romance series! And here it is! My cover artist, Linda Kuhlmann at Two Trees Studio did a fabulous job, as always. I’ve never been able to say publicly who did the majority of my covers since 2011, but she finally retired from her day job last year and now I can!

The house on the cover is a real one in the very location mentioned in the story, Samuels, Kentucky. (All of the Bluegrass Spirits books will be set in Kentucky, by the way.) Although I’ve taken some poetic license with some of the facts, after touring the house for the first time in December (something I’ve wanted to do since I was a kid and my dad told me “Jesse James used to hide out there” every time we drove by, which was often), I learned so many interesting stories and quirks about the house that I was thrilled to incorporate some of them in JESSE’S HIDEOUT. I know you’re going to enjoy Greg and Tillie’s story when it releases in the last half of March. (We’ve set up preorders at Apple, Kobo, and soon Nook for a March 28 release. Once I have the final edits done, we’ll be announcing Amazon links. Google Play will have it on release day. I reserve the right to release it early! All depends on how the next month of edits go!) 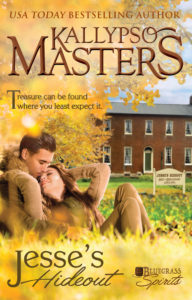 Tillie Hamilton is the latest person to use her 180-year-old house in rural Kentucky as a hideout—taking her cue from the infamous outlaw Jesse James who frequented the place. The house she converted into a bed and breakfast is the only sanctuary she’s ever known, ever since the old woman she inherited it from rescued her from neglect as a small child.

However, sparks fly when her benefactor’s handsome grandson, Greg Buchanan, accuses Tillie of exploiting his grandmother’s memory for her own ends by claiming Gram haunts the inn.

Greg vows to debunk the charlatan’s claims but quickly discovers the charming Tillie is not at all what he expected. Embarrassed to admit he’s another of the conspiracy theorists she scoffs at, he hides his other reason for showing up at her B&B. But while reading his grandmother’s private journals, he learned Jesse James returned to this house in the 1930s, half a century after historians believed he’d been shot dead.

And yet his attraction to Tillie keeps him torn between setting history right and forging a new history of his own in Tillie’s arms. Tensions mount, leaving his grandmother’s spirit to think her dying wish—something she’s wanted since Tillie and Greg were children—may never come true.

Can Gram and Jesse make the two lonely overachievers see they belong in each other’s arms before time runs out for them in this lifetime?

If you want to follow me on the journey as I share insights and behind-the-scenes tidbits about the books in this series, I’ve set up a Facebook group. Just ask to join my Bluegrass Spirits (Kallypso Masters Series) group on Facebook and off we go!

I’m 19,000 words into book two in this series–KATE’S SECRET. So excited to have found my writing passion again after it took a hit last year. Of course, I’m not finished telling stories in the Rescue Me Saga or Rescue Me Saga Extras, AND I still need to channel Grant, Gunnar, and Patrick to tell their story after I introduced so much of it in ROAR. But, as always, I have to follow my characters, whichever is screaming the loudest in my ear, or I just spin my wheels.

By Kallypso MastersFebruary 13, 2017NewsLeave a Comment on Join me as I launch a new series in March!