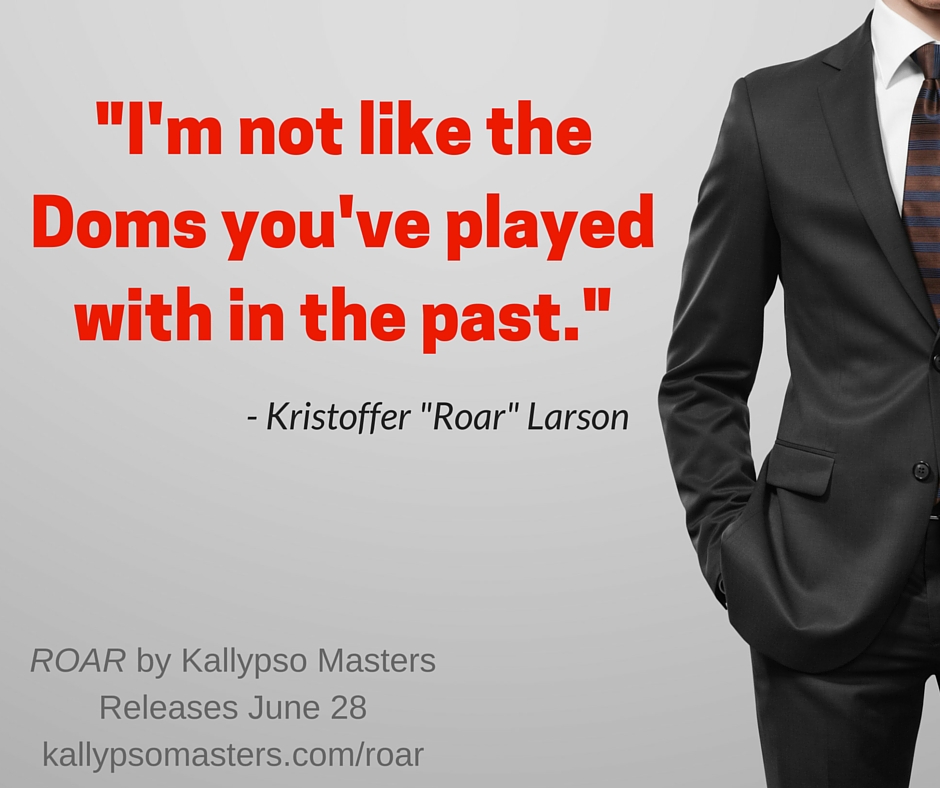 A Note from Kallypso Masters

There were so many other characters I’d promised stories about or you were screaming for, including Angelina’s firefighter brothers, and a trilogy with an overarching romantic suspense theme featuring Patrick Gallagher, Mistress V. Grant, and Gunnar Larson. But those characters didn’t come to me with their stories—although the last three are all in Roar as is Patrick’s lady (Maribeth!).

Instead, when asked by Red Phoenix in fall 2014 about doing a fun crossover with characters from our two worlds, out of the blue comes Gunnar’s cousin, Kristoffer. I don’t plot, plan, or mold my characters in any way, so in April 2015, when I wrote a collaborative scene for Red’s series involving Kristoffer unexpectedly seeing a colleague naked in a classroom in Master Brad Anderson’s The Denver Academy in Red’s Brie world, my thinking was that this would be a lighthearted, fun story. And as I tend to do, there are as lots of such moments throughout the book. Away I went to write from the shared scenes from my characters’ perspectives to mesh with Red’s story from Brie’s point of view. Only those of you who follow us on social media or in our newsletters probably even knew Kristoffer and Pamela were from my world when it came out in one of her serial installments last spring or when it was later published in her third full-length Brie novel, Brie Masters Love In Submission: Submissive in Love, in September 2015. If things had gone as planned, I was supposed to release Roar that same month. Here I am nine months later finally birthing Roar. (For this reason alone, I’ve learned that any type of collaboration in another author’s world is strictly off limits for me if they’re on a deadline and used to sticking to them! My apologies, Red, for screwing up what could have been a wonderful simultaneous crossover! I hope some of my readers will now go grab Brie’s stories and get to dive in for another great read.)

A month later, I was struggling and worrying about how my readers would accept this different type of Romance. I fought with Kristoffer for a full month starting when he threw me an enormous curve that had no place in a Romance genre. Of course, Kristoffer won; he is a Dominant, after all. But trying to write a happy ending that has never been done before presented me with a lot of challenges. It was during a two-hour editorial intervention just before KallypsoCon 2015 kicked off in New Hampshire last October, where Ekatarina Sayanova and Rebecca Cartee reminded me that I have to tell the story I’m given and listen to the characters rather than worry about how some readers might take my one-of-a-kind happy ending. That discussion and brainstorming session led to me rewriting the book (that would be the second version for those keeping score). But by March 2016 when I was supposed to be finishing up, the story had stalled out again. This is usually a sign that I’ve taken a wrong turn. Saya once again to the rescue, along with her Sir, and they helped me see that Marc and I had Pamela incorrectly pegged as a slave. Far from it—she’s an alpha submissive (with some dominant traits of her own that won’t be surrendered) and a physician to boot as my other brainstorming buddies (Meredith Bowery, Lisa Simo-Kinzer, and Ruth Reid) showed me. Away I went and third time was the charm. With pre-conceived notions already in published books, though, I had to tread carefully and try not to contradict what was already out about their story. I think I’ve managed to do that. Once I hit my groove, the words poured out of me in under three months—to become my second-longest novel to date (surpassing Marc and Angelina’s Somebody’s Angel). Surprisingly, a lot of the scenes I’d written in the first two Roar attempts still worked with major or minor revisions, which helped.

This book deals with a subject matter none of us want to talk about much less read about in our escapist fiction. However, that’s never stopped me before! So I hope as you read about Kristoffer’s great loss and the consequences we all potentially face in this twenty-first century world that it will spark conversations between you and your loved ones before it’s too late and you or they are faced with the unthinkable.

Normally in this space, I warn those who might have triggers and share information about where they can go to find information or someone to speak with if unexpectedly triggered in one of my books. I’m not going to do that in this one because I don’t want to spoil the read for you. Kristoffer’s decisions may be controversial for some, but ultimately how can we judge what we might do in similar circumstance unless we’ve experienced it?

Roar is one man’s journey from darkness to light as he struggles to maintain his dignity and integrity while opening his heart to love again. I hope you will boldly go where no Romance has gone before. (Yes, these two are Trekkies and there will be lots of fun along the way, too!) Hang on as this book takes you on the roller-coaster read of a lifetime.

I always give my readers a discount before going to full price during the preorder period and for the first few days after release. ROAR prices will increase by $1 at all booksellers on Sunday, so grab your copy NO LATER THAN SATURDAY, JULY 2!

Then hang onto your seats because this is going to be a roller-coaster ride! 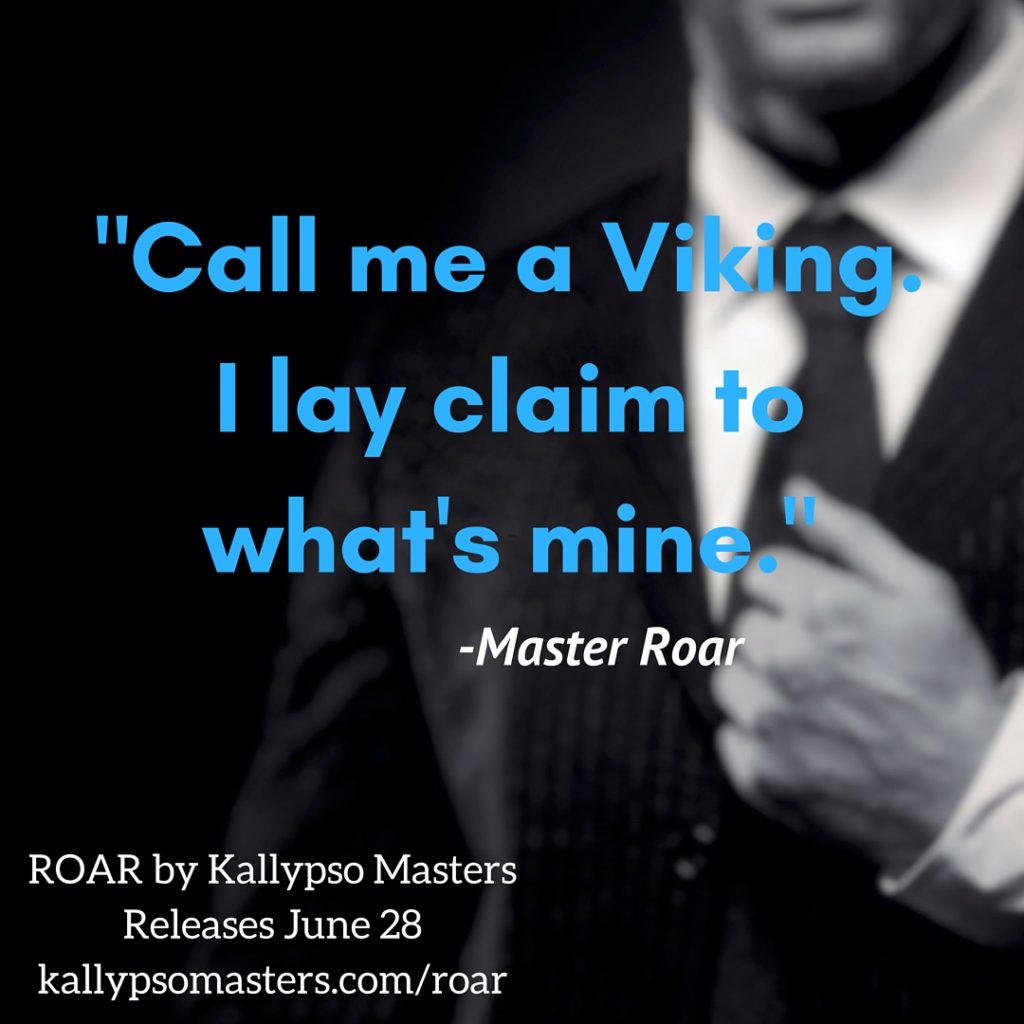 WHEN YOU HAVE FINISHED ROAR: This book is a standalone spin-off novel from the Rescue Me Saga but has secondary characters you may be familiar with. For that reason I have decided to give it it’s own dedicated Facebook discussion group separate from the Rescue Me Saga Discussion Group. BEFORE YOU JOIN PLEASE BE AWARE: We ARE allowing spoilers here. If you want to enjoy ROAR without anyone spoiling the huge surprise I’ve tried to keep away from you PLEASE, PLEASE, PLEASE DO NOT JOIN UNTIL YOU HAVE FINISHED ROAR! You aren’t going to miss anything in the discussions that won’t be there when you are ready to join in! I just want you to get slammed by the surprise the same way *I* was when I was writing it!

Click HERE when you have finished ROAR to join the discussion group!

If you’re not on Facebook, I’d love to hear what you thought about ROAR. Just e-mail me at kallypsomasters@gmail.com.

By Kallypso MastersJune 29, 2016NewsLeave a Comment on ROAR is LIVE!