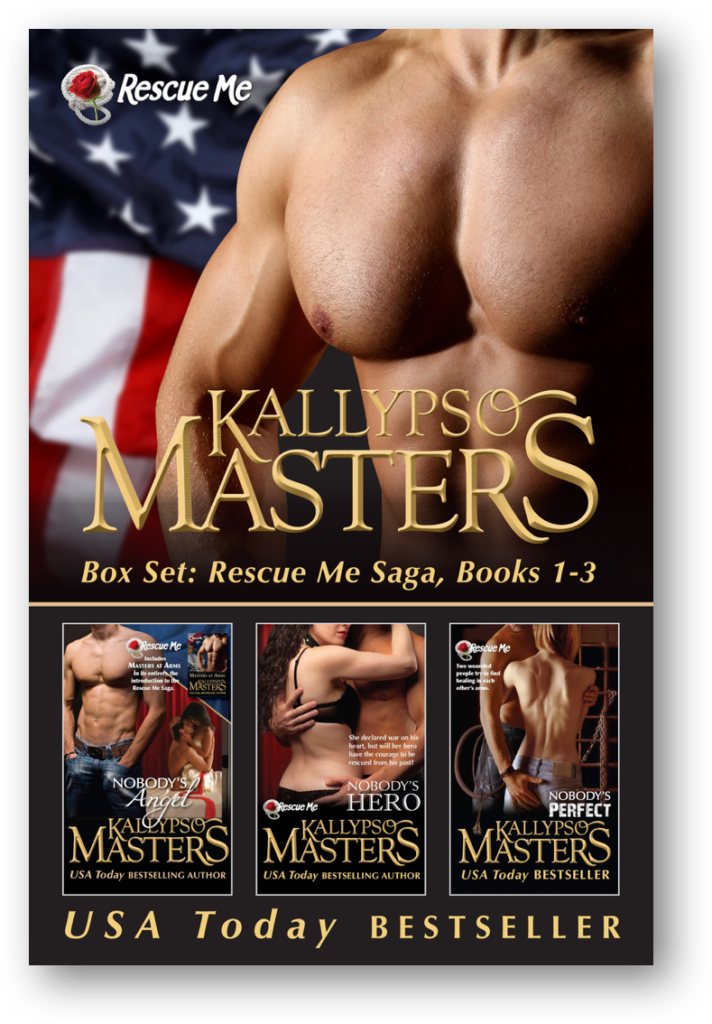 Need an escape from it all? To immerse yourself in a series that sucks you in and doesn’t let go? This set includes USA Today bestselling author Kallypso Masters’ first three Rescue Me Saga full-length novels, plus the introduction Masters at Arms.

The Rescue Me Saga focuses on healing deep, soul-shattering wounds in people who didn’t expect to find love in the bargain. Adam Montague slowly brings together his family of choice as the saga evolves (and, yes, are deeply involved in each other’s stories, so they don’t fade away after their happy endings, so be sure to read in order).

MASTERS AT ARMS begins the journey of three men, each on a quest for honor, acceptance, and to ease his unspoken pain. Their paths cross at one of the darkest points in their lives. As they try to come to terms with the aftermath–forging an unbreakable bond–will they ever truly become masters of their own fates? Or would fate become master of them?

Savannah/Savi escaped eleven years of abuse at the hands of her father and finally made a safe life for herself and her daughter. But when her father once again threatens her peace of mind—and her daughter’s safety—Savi runs to Damian Orlando for protection. Eight years earlier as Savannah (in MASTERS AT ARMS), she shared one perfect day with Damian that changed both their young lives and resulted in a secret she no longer can hide. But being with Damian reawakens repressed memories and feelings she wants to keep buried. After witnessing a scene with Damian on Savi’s first night at his private club, however, she begins to wonder if he could help her regain control of her life and reclaim her sexuality and identity.

Damian, a wounded warrior, has had his own dragons to fight in life, but has never forgotten Savannah. He will lay down his life to protect her and her daughter, but doesn’t believe he can offer more than that. Will two wounded survivors find love and healing in each other’s arms?