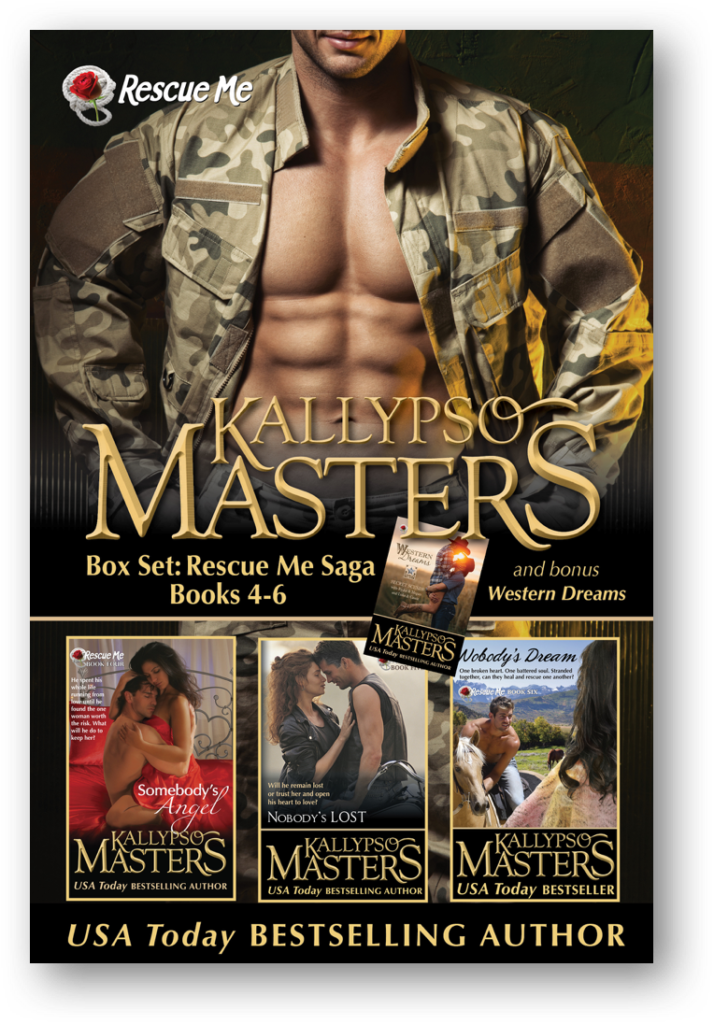 More than 1500 pages in three full-length novels, each with a happy ending, plus a bonus book, Western Dreams (Rescue Me Saga Extras #1)!

The Rescue Me Saga focuses on healing deep, soul-shattering wounds in people who didn’t expect to find love in the bargain. Adam Montague slowly brings together his family of choice as the saga evolves (and, yes, are deeply involved in each other’s stories, so they don’t fade away after their happy endings, so be sure to read in order. If you missed the box set for books 1-3, go here for more information).

When Marc D’Alessio first rescued the curvaceous and spirited Italian Angelina Giardano at the Masters at Arms Club, he never expected her to turn his safe, controlled life upside down and pull at his long-broken heartstrings. Months later, the intense fire of their attraction still rages, but something holds him back from committing to her completely. Worse, secrets and memories from his past join forces to further complicate his relationships with family, friends, and his beautiful angel.

No one said life would be fair or easy. Quiet, Peruvian-born artist Cassie López learned this the hard way. Betrayed by the man she planned to marry, she shut herself off far away from all but her closest friend from college…

Until the night Luke Denton came crashing into her Colorado mountain sanctuary with a vengeance. Confused by her heart’s response to this kind and gentle man, Cassie pushes herself to help the cowboy recover quickly so she can send him on his way. But Luke’s patience and understanding threaten to break down the very defenses she needs to survive in this world.

Search-and-Rescue worker Luke, who lost his wife and unborn child in a tragic accident, also knows firsthand of the unfairness of life. He keeps his own nightmares at bay by focusing on his rescue activities, most recently adopting and working with abused and neglected horses.

Can two wounded people find trust and love together? Do nightmares end where dreams come true?

SPECIAL NOTE:This book includes the continuing journey of Adam and Karla Montague. Rather than publish it as a separate short novel, Kallypso Masters realized this part of the story needed to be here in order for Luke and Cassie’s journey to continue. So it’s a bonus for readers who get an enormous book—and a much longer Rescue Me Saga visit with some of the couples you love!

WESTERN DREAMSis a collection of five original, SHORT glimpses into the lives of two beloved couples from the Rescue Me Saga. This collection gives readers some quick peeks at Ryder and Megan (including two “secret” scenes mentioned in NOBODY’S DREAMthat took place off the page, as well as two others that take place after the ending of that book). Readers also will catch a glimpse of how Luke and Cassie are settling in and progressing in their relationship at their new mountaintop haven.

Not available on Kindle.